150 Classic Skateboard Stickers from Studio Rarekwai - The new book published by Laurence King celebrates one of the most influential and prolific of all sticker scenes. 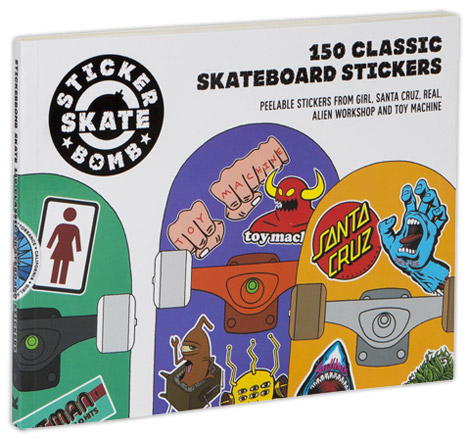 Stickerbomb Skate: 150 Classic Skateboard Stickers by Studio Rarekwai (SRK) and published by Laurence King in March 2015 celebrates what is arguably the most influential and prolific of all sticker scenes: skateboard stickers.

Skateboard artwork and graphics have formed an important part of the urban art scene over the last few decades. These colourful, crazy, fun illustrations have been the perfect promo tool for brands to spread their style, and every skater has amassed their own collection of stickers. Over the years, many artists have shot to fame by producing artwork that has become iconic, and it's these graphics and illustrations that have spread the world over.

This new book of fully peelable stickers, compiled by the Stickerbomb team, brings together the best skateboard stickers - both classic and new - from the 1970s to today.

From Jim Philip's legendary drawings for Santa Cruz, to the innovative, graphic-led creations from Girl and Alien Workshop, Stickerbomb Skate illustrates the central role that stickers have played in skate culture.

The five legendary skate brands included in Stickerbomb Skate are: Alien Workshop, REAL, Toy Machine, Girl and Santa Cruz and features interviews with key illustrators and artists including Philips, Ed Templeton and Mike Hill. This is the indispensable collection for any skate obsessive.

The SRK (Studio Rarekwai) is a creative studio based in London and Jakarta. Founded in 2006 with a focus on documentary films, the SRK has since grown in size to include a troupe of creatives whose skills encompass film-making, sound design, animation, illustration, publishing and events. Clients include Polydor Records, ARTE TV, the BBC, Film4, MTV and SONAR.