The World Atlas of Street Art and Graffiti

The World Atlas of Street Art and Graffiti offers the reader an insider’s view of the urban landscape as the artists themselves experience it. 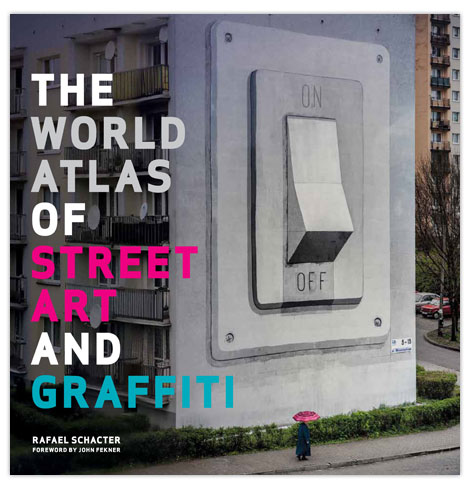 Since its genesis on the East Coast of the United States in the late 1960s, street art has travelled to nearly every corner of the globe, morphing into highly ornate and vibrant new styles.

From Steve Powers (Espo) in New York to Kid Zoom in Australia, taking in Banksy’s London, Paris as transfigured by Honet and OX, and the gargantuan murals of the Brazilian twins ‘Os Gêmeos’, The World Atlas of Street Art and Graffiti is the first truly geographical history of the form.

Featuring specially commissioned works from major graffiti and street art practitioners, The World Atlas of Street Art and Graffiti offers the reader an insider’s view of the urban landscape as the artists themselves experience it.

This beautifully illustrated book, produced with the help of many of the artists it features, dispels the idea of such art as a thoughtless defacement of pristine surfaces, and instead celebrates it as a contemporary and highly creative inscription upon the skin of the built environment.

Organized geographically, by continent and by city – from New York, Los Angeles and Montreal in North America, through Mexico City and Buenos Aires in Latin America, to London, Berlin and Madrid in Europe, as well as Sydney and Tokyo in the Pacific – it profiles more than 100 of today’s most important artists and features over 700 astonishing artworks.

Video from Nelly Duff featuring the release of Ben Eine's 'Tenderloin A-Z' and 'The World Atlas of Street Art and Graffiti' in East London.

Buy from Amazon.co.uk
Back to Books & Media
Comments powered by Disqus