The super-successful Stickerbomb line of books, Stickerbomb XL takes it to the next level, with large format and vinyl stickers. 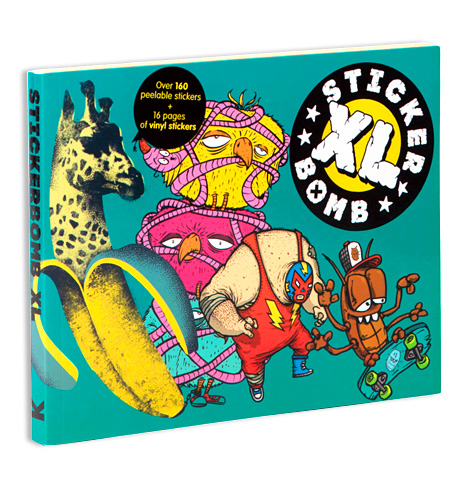 Stickers are an essential part of the street art movement. Inexpensive and easy to produce, they act as a kind of informal business card for some graffiti writers, and a quick and effective promotional tool for many artists and illustrators. As more and more stickers are placed around major cities in the world, interest in the subject keeps growing.

Stickerbomb XL is filled with an amazing collection of more than 160 specially-commissioned stickers by artists, illustrators and graffiti writers from around the world, many of whom have not been featured in a publication before. It will appeal to a young market of designers, street artists, and illustrators, plus street art fans and anyone who collects stickers.

The SRK (Studio Rarekwai) is a creative studio based in London and Jakarta. Initiated by a director and producer partnership in 2006 with a focus on documentary films, SRK has since grown in size to house a troupe of creatives whose skills encompass filmmaking, sound design, animation, illustration, publishing, and events. The SRK has worked with Polydor Records, ARTE TV, the BBC, Channel 4, Film4, MTV, SONAR, Spaceshower TV and a number of international non-governmental organizations. Their books include RackGaki, Graffiti Asia, and the Stickerbomb series (all Laurence King).