Full of great skull inspired artwork, all as peelable stickers. Another great publication to compliment the set of Stickerbomb books published by Laurence King so far! 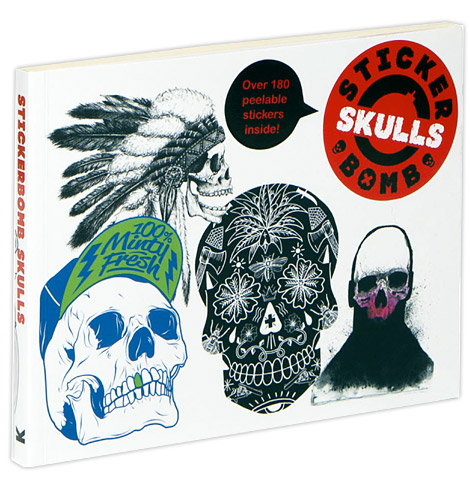 Stickerbomb Skulls by Studio Rarekwai (SRK) and published by Laurence King in August 2014 is a collection of fully peelable skull stickers from artists around the world. Featuring everything from the kitsch to the surreal via bold colours, monochrome, splashings of cartoon-like illustrations and intricately printed patterns, you'll find the perfect skull for every occasion in this fun and quirky pack.

Stickerbomb Skulls is the latest themed book in the Stickerbomb series, featuring many forms of design and illustrations of skulls by an eclectic mix of international artists. Skulls are a highly stylised and extremely popular visual icon that are used extensively in the worlds of fashion, jewellery, graphic design, music, street art and tattoos. The book will appeal to existing Stickerbomb fans as well as new fans who love skull imagery.

Stickers are an essential part of the street art movement. Inexpensive and easy to produce, they act as a kind of informal business card for some graffiti writers, and a quick and effective promotional tool for many artists and illustrators. As more and more stickers are placed around major cities in the world, interest in the subject shows no sign of slowing.

The SRK is a creative production studio setup by Ryo Sanada and Shazeed Hassan in 2006. Aside from being the creators of the Stickerbomb books, Ryo & Shazeed also authored the first books to explore Asian graffiti culture, from Japan down to Indonesia. (RackGaki [2006], Graffiti Asia [2009]). Pursing their passion for creative content with an international outlook, Ryo & Shazeed are also known for producing award-winning documentaries exploring music, the arts and human interest stories.