WRH's original wall at Trellick Tower Hall of Fame in west London (painted in 1995 by Doze, Prime and PIC) was finally revealed in 2012. LDNGraffiti had the opportunity to talk to Doze about painting the wall and seeing it appear again.

Doze WRH: It was 17 years since we painted the big wall, and for most of those years it was covered almost entirely with foliage following the landscaping of the area... until now! (2012)

WRH painted the wall, myself, Prime and PIC, I'm guessing it would've been summer '95. Robbo had pretty much completely retired at the time, and Choci too, who was running his successful record shop 'Choci's Chewns' and DJ'ing around the globe. If I recall we'd been trying to get Robbo active again and felt that when he saw what we'd done it might give him that jolt. 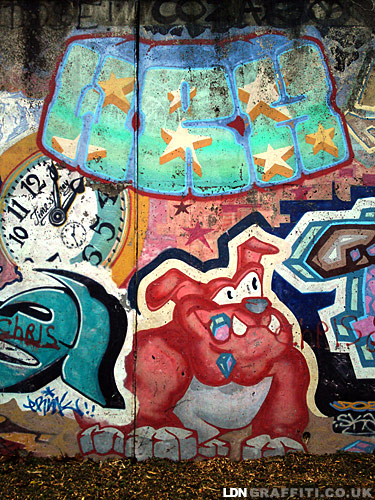 Prime wanted to paint a big wall, his plan was to actually take on the bigger wall to the left, the breeze block one, and already had the 'Staying Power' theme in his head because WRH (We Rock Hard) was nearing its 10 year anniversary, so he took me down there to scope it out.

We had to remove piles of rubble and cut down loads of bushes to get to the wall, we started by emulshioning the whole thing, but mixed up colours with the paint and rollered big blocks to make a background, as the intention at the time was for him to do a big 'Staying' piece, and me to do a big 'Power' piece. I did the dog in the centre, biting a chunk out of my letters.

As the days went on we started adding more and more and building on the theme of power, hence the desert, the sea, the mountains and the stormy sky to the far right. Prime did the clock face to portray the power of time, and I filled my large power piece to resemble rocks and lava to portray the earth. Prime did the 'U Can C I B 3' piece in an arabic script above his Staying piece and I added another Power piece, and also my classic Doze outline above. PIC did the WRH piece in the centre top as well as filling-in loads of the background work.

Because, as I said at the beginning, we hadn't originally planned to cover the whole wall, we didn't have any large step ladders. All the work at the top was done by propping up small step-ladders on top of an overturned shopping trolley. It was pretty precarious and slow work, but we managed it.

One of the last things I added were the scales of justice, evenly balanced with the words 'Creative' and 'Destructive' in the pans. The dedications in the top right corner were for friends and for Writers from the area or who were up on the Met that ran past nearby, but mainly the wall was dedicated to the 'Non Stop Art crew' who's huge wall 'The Earths Edge' was directly to the right of 'Staying Power', faded but still there in all it's glory.

I'm guessing we spent about 10-12 days going backwards and forwards to the spot, it's a rough neighbourhood and I remember we did have a few local heads pass by. But the only trouble we really had to contend with was the objects being launched at us from Trellick Tower. Some of it was from people who didn't know how to dispose of a shitty nappy properly, but some were household objects, and they were directly aimed at us. We tried to stay as close to the wall as possible, to narrow their angle down a bit. The shout of "Incoming!" went up fairly regularly.

One day, as we were packing away our shit in the car, we heard a loud bang followed by a splattering sound, a matter of 10 feet away, it was a 2 litre tin of paint... that was a close call!

The actual wall we painted is the support for the canal bank, because the canal's water level is above the area we painted, it was pretty badly flooded. The water was stagnant and stank so badly we had to have our noses and mouths covered on the really hot days. There were also a lot of syringes strewn around so we were always mindful of where we trod in case of getting spiked.

I'm not sure exactly when, but some time after we completed the wall the council set about landscaping the whole plot and dealing with the flooding. Where our wall was, they planted trees and shrubs that eventually grew to cover and obscure our work. I went down there one day with my kids and I could only really see parts of the top. I liked the fact that it was now inaccessible and would probably stay forever... a true story of Staying Power, of course though I was wrong :)

Sadly i don't think it'll last long in its exposed state, it already has a couple of dubs on it, but it sure is nice to see it resurface...

To everyone who's supported WRH over the years : Thank you.
To Robbo, always in our thoughts Brother.
To Kelly, always in my heart.

Many thanks to Doze and all of WRH for all the help and support in helping produce LDNGraffiti. Team Robbo!